A Dependable Company Since 1886

Use this manual if your electric winch has a gray cover, it operates on a 12 volt battery, it has a strap, and it has the switch on the side of the winch

Find in the list below the problem you are experiencing with your winch, then click the “+” sign near a “Possible Cause” for an explanation of how to fix it..

SAFETY NOTES: Many of the following trouble shooting procedures require removing the winch cover to observe or test components. Even if not mentioned in the procedure, always disconnect the winch from its 12 volt power source when removing or replacing the cover and reconnect the winch to power only when necessary to make a test or observation. Be extremely careful to avoid contact with electrical shock hazards and to keep hands away from any parts that will move when power is applied.

Motor will not run in either direction

Possible Cause: No power to winch

Remove the two motor wires from the switch on the inside of the winch cover and touch the wires directly to the terminals of a 12 volt battery. If the motor fails to run, or runs erratically, it needs to be replaced. Order motor 304742.

After confirming that 12 volt power is present at the switch and that the motor runs when connected directly to a battery, then the only other possibility is the switch. Order switch 206007. Be sure to connect wires exactly as shown in diagram. 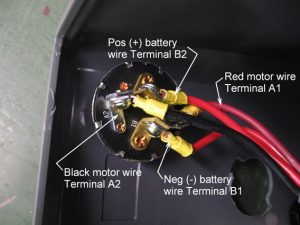 Motor runs in only one direction

Replace switch 206007. Be sure to connect wires exactly as shown in diagram.

The strap must wind onto the bottom side of the drum. This is critically important and must not be reversed. 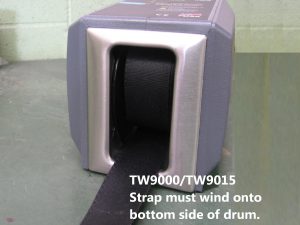 Check to be sure that all wires are connected to the switch exactly as shown in diagram.

Possible Cause: Normal during initial power out use

Limit motor run time to a maximum of four minutes followed by at least 20 to 30 minutes of cooling. Motor run time is critical even when winch is not pulling its full capacity or is letting cable out.

If motor slows down a lot and groans to pull load, winch is probably overloaded. Reduce the amount of load being pulled.

Possible Cause: Weak battery or connections

Recharge or replace battery and confirm good clean connections for both positive (+) and ground (-) wires.

The strap must wind onto the bottom side of the drum. This is critically important and must not be reversed. If the strap is wound the wrong direction, the motor will be working against the brake and may have difficulty pulling the load.

Possible Cause: Brake disc is stuck on motor shaft

First confirm that strap is wound on winch spool in the correct direction. Then remove the winch cover and observe the brake disc on the motor shaft. If the brake disc spins while the winch is pulling in a load, it needs to be replaced. Order brake disc number 304422. 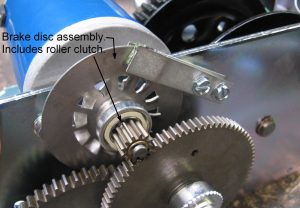 Possible Cause: Clutch lever is in freewheel position

Possible Cause: Loose strap on reel

If the winch is new or has a new strap installed, it may take several revolutions of the winch reel before the strap tightens sufficiently on the reel to begin pulling a load.

Possible Cause: Clutch out of adjustment

Move clutch lever to freewheel position and then let it gently return to the engaged position using spring pressure only. DO NOT FORCE THE LEVER TO THE STOP. Remove the two small phillips head screws and the clutch lever and examine the position of the spring keeper lug in relation to the stop in the side of the housing. If the lug is touching or very close to the stop (see photo), then clutch is out of adjustment. There are two possible causes which need to be investigated. The thrust bearings could be worn out or the clutch pad could be damaged. To investigate these possibilities, remove the winch cover and disassemble the clutch mechanism as follows. With a flat blade screwdriver pry the end of the clutch spring from the hole in the winch base. The spring tension is quite high and the spring will snap violently when it comes free, so be careful to keep your hands and other body parts away. Rotate the plastic O-ring so the the cut out portions align with the pegs on the spring keeper. The O-ring can then be expanded with a pencil, pocket knife or similar tool and the spring keeper can be lifted free from the clutch nut. Thread the clutch nut off of the stud (it is a left hand thread). You will then see the outer thrust bearing with a hardened bearing race (flat washer) on both sides. Lift both of the gears off of the stud and notice that there is a small spring washer between them. The inner thrust bearing and two races can then be removed. There will be additional spacer washers on the stud and these should remain on the stud. Check the condition of both of the thrust bearings and the races and replace if noticeably worn, dry or burned. Order and install thrust bearing kit 5703194, which includes two bearings and four races. Examine the condition of the clutch pad. This is bonded to the large gear in newer models or bonded to the flange of the small gear in older models. If there are portions of the clutch pad missing or torn away, or any other significant damage to the pad, a replacement is necessary. If the clutch pad in your winch is bonded to the large gear, you can replace just that gear. Order 84 tooth gear assembly 306101. If the clutch pad in your winch is bonded to the clutch gear flange it will be necessary to order clutch gear assembly 306100 in addition to the 84 tooth gear. Reassemble and adjust the clutch by the following procedure. Place one of the thrust bearings (with a race on each side) on the clutch stud. Next install the clutch gear and the spring washer oriented as shown in the photo on the stud followed by the 84 tooth gear turned with the pad facing the clutch gear. Install the outer thrust bearing (with a race on each side) and then install the clutch nut (left hand thread). Use the plastic spring keeper to tighten the nut by hand only. Then insert one leg of the clutch spring into the hole in the spring keeper. Both legs are the same length and it makes no difference which one attaches to the spring keeper. Position the keeper on the clutch nut so that the lug is positioned at the 2:30 o’clock position (see photo). Reinstall the plastic O-ring and rotate it slightly to lock the spring keeper in place on the clutch nut. Grip the free end of the spring with pliers or vise grips and insert the end into the hole in the winch base. This is challenging because the spring tension is quite high. Make sure the end goes all the way into the hole. Slip the clutch lever onto to the spring keeper and move the lever to the freewheel position and gently allow it to return to the engaged position using the force of the spring only. DO NOT FORCIBLY MOVE THE LEVER PAST WHERE THE SPRING TAKES IT. Remove the lever and check the position of the lug on the spring keeper. It should be at approximately the 2:30 o’clock position (see photo). If not, without moving the position of the clutch nut, disassemble the spring, O-ring and spring keeper and reposition the keeper on the nut so that the lug is at 2:30 o’clock and reassemble. Recheck to confirm that the spring keeper stops in approximately the same position when the lever is moved to freewheel and allowed to return to engaged using spring pressure only. Note that if the lug on the spring keeper is set too high, the clutch may slip under heavy load. If it is set too low the clutch will be too tight and will create excess strain on the motor and excess load and heat on the thrust bearings. Our clutch adjustment video may be helpful.

Possible Cause: Damaged gears or other broken parts

Remove the winch cover. Run the winch and observe which parts are turning and which are not. This should make the source of the problem obvious. Refer to the owner’s manual or website for the necessary repair parts.

The circuit breaker is designed to cut power to the winch in the event of a substantial overload. It will automatically reset after a short cooling period. Note that the circuit breaker will not protect the motor from damage due to excessive run time. 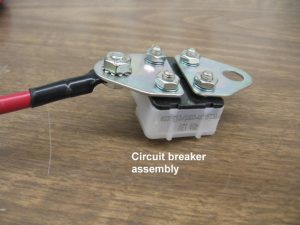 If problem persists after confirming that the load being pulled is within the capacity of the winch, then replace circuit breaker assembly 304025.

Winch will not hold load

The strap must wind onto the bottom side of the drum. This is critically important and must not be reversed. If the strap is wound the wrong direction, the brake will not work.

Check condition of the small brake pads that contact the brake disc on the motor shaft. If the pads are severely worn or either pad is missing, order and install a brake spring replacement kit 5703160.

Confirm that load is within capacity of winch.

Strap will not freewheel

First confirm that clutch is in freewheel position. Then with no load on winch jog power switch to see if clutch will open and allow freewheeling. If this does not work, remove any load from the winch, put the clutch lever in the freewheel position and remove the winch cover. Then gently pry the clutch gear and mating gear apart by inserting a screwdriver between them. 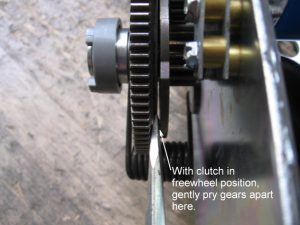 Possible Cause: Rubbing, bunching or folding of strap

The strap is considered a perishable item and will periodically need to be replaced. Follow these suggestions to maximize strap life: It is essential that the winch is aligned with the load so that the strap goes straight into the front opening of the winch without severely rubbing on the edges of the opening. Allowing the strap to rub on anything, or allowing it to feed onto the winch reel in a bunched up or folded over fashion will quickly damage and weaken the strap. The strap must lay flat on the winch drum. Strap can easily be cut if it is under tension and allowed to contact any metal edge, even if it does not seem especially sharp. Keep the strap in good condition and replace when damaged.

The winch has sufficient power to break the strap if overloaded. Monitor load carefully to prevent a sudden rise in strap tension. Keep strap in good condition and replace when damaged.

Make certain that load is fully engaged into the throat of the hook allowing the safety latch to close. Engaging only the point of the hook on the load could cause hook to open up or break.

Overloading the hook will cause it to spread open and possibly break. Reduce the load.

The Dutton-Lainson Company is
a leading manufacturer of quality
products for marine, agricultural,
industrial, and automotive markets
throughout the world.

GET TO KNOW US